“The History of the Victorian Deaf and Dumb Institution” by the Rev. Dr. Watkin

On 16th February 1859, a letter appeared in the Melbourne Argus, appealing for help for the Deaf Mutes of the colony as there were no educational arrangements for these children. Other correspondence followed. Among the correspondents was Mr. Frederick John Rose from his residency in Sandhurst (Bendigo), a deaf mute, who was a well educated deaf man who had come from England in 1852 and had been educated at the Old Kent Road School for the Deaf in London. He formed a friendship with the writer Mrs. Sarah Ann Lewis, whose daughter, Lucy Ann Lewis, became his first pupil. 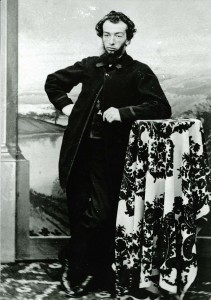 As neither the Government nor the general public took up the matter, Mr. Rose commenced a private school for the deaf. From 1860 to 1866 this school was conducted in several buildings in Windsor, and the pupils increased from 12 to 28. To Mr. Rose, who still survives, belongs the honour of founding the Institution. For some time he conducted the school at pecuniary loss, but timely help came from the Denominational School Board making a grant of £100 towards the teachers’ salary. In consequence of the inability of some parents to pay the school fees, an appeal was made for public support. A provisional committee of eight persons was appointed. The following were the committee:- The Revs. S. L. Chase, Donald Macdonald, James Bickford, William Moss, the Hon. A. Fraser, M.L.C., the Hon. Geo. Rolfe, M.L.C., with Messrs. H. Jennings & Alexander Morrison.
The Rev. W. Moss was Hon. Secretary. There is no one to whom the Institution owes such a debt of gratitude as to Mr. Moss. He was secretary for 30 years, and during part of that time every year he gave up his holidays and accompanied Mr. Rose and some of the pupils who attended public meetings in aid of the institution, in all parts of the State. These meetings, with the object lessons presented of the way in which deaf mutes were being educated, were of immense service to the funds. Dr. Watkin, who was the President of Wesley College, joined the Committee in 1884 and was appointed Hon. Secretary when the original Hon. Secretary, Rev. William Moss, died in 1890, and he remained as Hon. Secretary until the Committee in 1903 appointed Mr. John Adcock who became the first paid “Superintendent and Secretary”. When Dr. Watkin died in 1916 he had given 32 years remarkable continuous service to the institution.

In 1866 the land occupied by the Institution, with an area of about six acres, was granted by the Government, and vested in trustees. The foundation stone was laid by Sir Charles H. Darling on March 6th, 1866, and on October 13th of the same year the opening ceremony was performed by Sir J. H. T. Manners Sutton, K.C.B.

The buildings then consisted of the central edifice and the southern wing. In 1870 the increase of pupils rendered it necessary to complete the northern wing. In 1907 further additions were made. Most of the site available for building has now been utilised. Further additions must necessitate reducing the size of gardens and playgrounds.
A cottage hospital was erected in 1887, to provide isolation for pupils during epidemics. Through Divine providence, the occasions on which the hospital has been utilised have been few. The buildings are fairly adapted to the requirements of the institution, in school-rooms, dormitories, dining-rooms, kitchen and laundry. The total cost of the buildings has been about £27,000, towards which the Government has contributed £14,500 and the public £12,850.

The pupils number at present 97. Four more are to be admitted in August. Of these 99 will be resident and 2 non-resident, making 101. These pupils come from Melbourne and suburbs, and very many other parts of the State. The number of pupils enrolled since the establishment of the Institution has been 534. In August the accommodation will be quite taken up. There will not be room for another resident pupil.

METHODS OF INSTRUCTION
For many years the manual and sign system was the only one employed. Excellent results were obtained by Mr. Rose and his assistants. For a number of years the combined manual and oral systems have been employed with improved results.

On the subject of the method of instruction, the Head Master (Mr. W. D. Cook) writes: “Our programme of instruction is a comprehensive one, and is substantially that adopted by a majority of the schools for the deaf in other parts of the world. The prime object in our teaching is to give the pupils a practical understanding and command of the English language, and in the attainment of this end we employ the best means within our reach.”

“Daily instruction in articulation is given to every pupil that shows capacity for such training, and at the present time the large majority are being taught by this method. In no case, however, is oral training carried on at the sacrifice of intellectual development. Natural signs and manual spelling are occasionally employed as supplementary aids in teaching, though, as the pupils advance into the higher grades, communication between teacher and scholar is conducted almost entirely through the media of lip-reading and speech. Instruction in drawing and modelling is given to all in the school, also painting to those who show talent for artistic work, and who desire such teaching.

We have adopted the oral system in preference to all others for the reasons tabulated below –
1. “It is well-known that the natural use of the organs of the body strengthens and develops them, and the use of the pupils’ lungs for speaking as well as breathing, has been proved to
be beneficial to their health.” – J. M. BROOMALL WARD, M.D.

2. “We recognise that deaf children, after leaving school, must live among hearing people, who have little or no knowledge of manual spelling or signs.”
3. “We have found by experience that pupils instructed on the oral method acquire a better command of our language than those instructed on the silent or manual system.”
4. “The gesture language as used in some schools prevents the acquiring of English as a vernacular. It also causes the deaf to associate in adult life, and the consequence is they
intermarry, and their affliction is transmitted to their offspring, so that statistics to-day actually show that the deaf mutes are increasing in number”. – DR. GRAHAM BELL.

Mr. Cook has had twenty-nine years experience in the Institution as a teacher, first under the manual and secondly under the oral system, and so is thoroughly qualified to judge of the merits of the respective systems. The staff of teachers consists of the Head Master, assisted by one male and seven female assistants, and four of these have had over 10 years experience as teachers of the deaf. With the exception of one junior teacher, who is still studying, all have conformed to the rules of the Institution in passing examinations satisfactory to the Education Department of Victoria.

From the remarks made by those who have recently visited kindred institutions in the United Kingdom and elsewhere, the Board of Management is of opinion that the education given in the Victorian institution will compare favourably with that given in the Mother Country and the United States.

The staff of teachers is very efficient. Mr. W. D. Cook has shown himself for over 20 years an efficient Head Master. All his staff have been trained by him. Teachers trained by him have been appointed Head Masters of the Brisbane and Hobart institutions.

It has been a source of regret to the Board of Management that they have not had the funds at command to pay the staff of teachers as liberal salaries as are paid to teachers of deaf mutes in
the United Kingdom and the United States.

The first Superintendent and Matron were Mr. and Mrs. F. J. Rose. They were succeeded by Mr. and Mrs. W. Jones. After the death of Mr. Jones and the retirement of Mrs. Jones, Mr. and Mrs. J. Adcock were appointed.

For a number of years Mr. Evans has made a most efficient Assistant Secretary. All have discharged their duties with a devotion and ability worthy of the highest praise.

PHYSICAL EDUCATION AND SPORTS
There is a well-equipped gymnasium, which was brought up to date in 1904, when a competent instructor (Mr. G. Bell) was appointed. During the last few years a Cricket Club, also a Lacrosse Club, has been formed. Matches are arranged on Saturdays against teams of hearing boys, and the deaf boys more than hold their own. For the winter evenings there is bagatelle. Other interesting games are also provided, and the Library supplies suitable books.

OTHER BRANCHES OF EDUCATION
Many of the boys are taught carpentering, bootmaking and gardening, while there are dressmaking and sewing classes for the girls, who also have experience of all kinds of domestic work.

THE ADULT DEAF AND DUMB SOCIETY
The institution only provides for the deaf children. The Adult Deaf and Dumb Society has done admirable work for deaf mutes who have passed school age. For many years funds were collected towards the cost of the Church and Social Hall for the Adult deaf in Flinders Street. Since the arrival of Mr. Abraham, his enthusiasm and ability have done wonders in securing the necessary funds for the farm at Blackburn. The members of the Board of Management rejoice in knowing that the Committee of the Adult Deaf and Dumb Society and Mr. Abraham have found most hearty co-workers in former pupils of this institution. The Board further desires that there should be most cordial co-operation between themselves and the members of the adult Deaf and Dumb Society.

JUBILEE GARDEN PARTY
One of the most interesting functions held in the history of the institution was on April 22nd of the present year, when, at the invitation of the Board of Management, a large number of the old scholars assembled to commemorate the jubilee. Addresses of welcome to the old scholars were given by Dr. Watkin and Mr. David Brown.

The prizes for 1910 were fitly distributed by Mr. F. J. Rose, the founder of the institution. The following presentations were made by the old scholars:- A cutler oak desk to the Head Master (Mr.W. D. Cook); a purse of sovereigns to Miss Jones, who had been sub-matron for over 30 years; and a framed historic group of photographs to the Board of Management. Afternoon tea was served in the hospital buildings. The weather was fine, and the arrangements reflected the highest credit upon the Superintendent and Matron (Mr. and Mrs. Adcock).

THE FUTURE
For many years the Board of Management has brought under the notice of successive Governments the necessity for the compulsory education of the deaf. By the Amending Education Act of 1910, this has been made law, and it must lead to an increase in the number of pupils, further accommodation will therefore be needed.

With this in view, the present State Treasurer and Acting Premier (Mr. Watt), made the very practical suggestion at a late interview with members of the Board of Management, that the State Education Department should take over the cost of education, leaving the maintenance grant to be applied to that portion of the work of the institution that is not compulsory, but without which the application of compulsory education to the deaf and dumb would be manifestly impossible. The appeal for the deaf children is so very pathetic and powerful, that neither the Government, nor a public noted for its open-handed gifts towards worthy objects, will turn a deaf ear, when in the near future they are asked to contribute the sum required to increase the school and house accommodation, and to equip the Institution with all that is necessary to make the education of the deaf in Victoria equal to that given in the institutions in any other part of the Empire or in the United States.